My dad, Herman Andrew Helfrich, born December 14, 1907, in Pittsburgh, PA, was the only boy among seven  sisters.  His parents were Lorenz A. and Mary E. Herr Helfrich, and they had four girls and dad.  However, Lorenz had been previously married to Elizabeth Schehl prior to Mary Herr, and that union produced

six children, of which three were girls.  The three boys from that first marriage all died within the first five years of their lives, leaving seven girls and Herman.

His record shows that

he served at sea service on the USS Cleveland  from October 1923 to August 11, 1925. When they discovered that he was under age, he was discharged 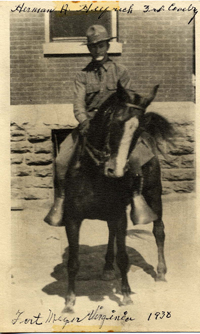 enlistments and discharges took place at Ft. Meyers, VA.  Dad was a PFC Specialist 4 in the machine gun troop - 3rd Cavalry during these tours.  The pictures of dad on the horse were taken at Fort Meyers, VA.  The one on the left was 1935 and the one on the right was  in 1930. The photo states that his horse's name was Peggy.

Dad met his future wife, Mary (Betty) Elizabeth McCoy, at Fort Meyers, VA, and  they were married while he was stationed there on February 28, 1930. They had two sons, Herman Larry and Charles Earnest, in the next three years.

Here are some pictures below of the Machine Gun Troop - 3rd Cavalry in Fort Meyer, VA, that dad was in.  Just click on them and it will enlarge. Dad served his four year tour, was discharged, and went into the bakery business in Zelienople, PA.  We think the name was Stallings Bakery, where he worked as a baker. 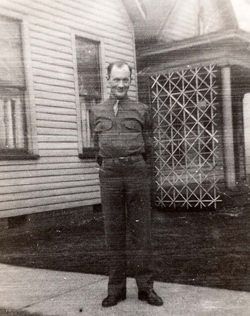 At the onset of WWII, he reenlisted in the U. S. Army.  He was processed so quickly that during the physical, when they found his teeth were so bad, they pulled them all.  Shortly thereafter, he was shipped to England for preparation for the Normandy Invasion.  He was in a combat division, and on his military papers we found the following:  Decorations and Campaigns - Northern France Normandy GO #33 WD45 Ardennes Central Europe Rhineland GO #40 WD#45.  Decorations and Citations:  Bronze Star Medal; GO#94 Hq 83rd Div; 10 May 45, Good Conduct Medal, European African Middle Eastern Theatre Service Medal with 5 Bronze Stars. Dad was an infamous "First Sergeant."  Later, he served in the Food Service area of the U. S. Army.  This was truly his forte, as he loved to cook. 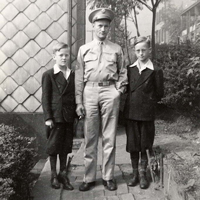 This picture to the left of Sonny, dad and me was probably taken about 1942-1943 in Pennsylvania before dad went to Kentucky and then on to England for the Normandy Invasion in WWII.  Please go to the page for my dad (listed as Herman Andrew Helfrich - WW II) with many pictures of him in England and Europe during WW II.

As stated above, dad was awarded the Bronze Star May 10, 1945, but he would never talk about the war.  He said it was just something that he did not even want to think about, much less talk about it.

Per Herman Larry (Sonny), dad's oldest son, dad felt that he was over there fighting his own people, since his dad was from Germany.  A lot of the soldiers went through villages where their parents had lived and grown up.  Sonny spent a lot of time with his dad in Germany when he enlisted in the army himself, and he said that his dad won the Bronze Star for bravery in Germany.

When he came home, he and mother spent their next tour of duty at Fort Jackson, SC.  The next and last duty assignment was Fort Belvoir, VA, where he retired with more than 23 years of service.  He then went to work managing the Fort Belvoir Commissary in the civil service.

Dad was quite the chef and all of the family delighted in the meals that he put forth, especially during the holidays with everything made from scratch - soup to nuts.  His grandsons would try in later years to compete with him, and it became quite a contest.  One special memory was when his grandson, Les, at the age of ten, decided that he was going to make a cake that would rival his granddad's.  It looked as if he succeeded, until his granddad asked "how many toothpicks did you have to use to hold that cake together?"   Les truthfully answered, "the entire box."  They both had a great laugh with that one.

The grandsons all loved to tease their granddad and their favorite thing was to say "granddad, I have a wash cloth here, let me comb your hair with it,"  because dad had so little hair at that point.  They did like to tease him and he got a big kick out of it.  All of dad's grandsons have taken after their "granddad Helfrich," in that they all love to work in the kitchen, and enjoy any and all cooking, baking and grilling.  All four of the grandson's wives appreciate the fact that dad's talents were inherited by his grandsons.

Dad loved to work in the yard and was quite a handyman around the house. Dad was always helping the neighbors with repairs and their yards. His grandsons inherited those yard and repairing traits from him, as well as his cooking skills. 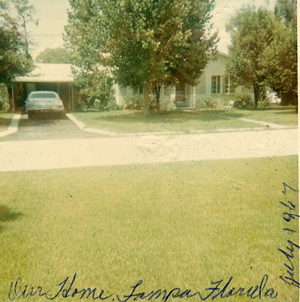 After retirement from the commissary, dad and mother retired in Tampa, FL in 1965.  Here is a picture of that home on the right.  This picture to the left was one of the last pictures taken of dad in 1978 by one of his rose bushes.  They enjoyed the warm weather in Florida, and one of dad's fondest memories was their 50th wedding anniversary that is written about in more detail on mother's page and on their 50th anniversary page.  Dad and mother wiped away many tears more than once that evening, and dad talked about what a great anniversary it was for many months to come.

Sadly, just six months after the 50th anniversary celebration, dad had a mini stroke and other complications, as a result of a brain cancer diagnosis.  MacDill AFB air-evacuated him to Mississippi where they attempted to operate, but it was hopeless.  Dad passed away on September 4, 1980, at the military hospital in Biloxi, MS.  He was 72 years old, just two months short of his 73rd birthday.  Cause of death was brain and lung cancer.  He lived long enough to see his two sons have nine grandchildren for him to be proud of and the great-grandchildren came later.  Dad is sadly missed and fondly remembered by me and our sons.  They so loved to tease him, and he was such a good sport.  Dad was of the Catholic faith, and his remains are with his wife, Betty, at: