This will be "Roddie Lee Josey's Oil Derricks in The Sky" page, since he worked in the  oil fields, when he was younger.  According to our aunt Lessie Josey, Roddie Lee Josey was a hard worker in the oil fields and, later in life, he farmed. In later years, a couple of Roddie's grandsons followed in his footsteps, because they went into the oil industry.  Roddie was born in DeSoto Parish, LA on December 23, 1875.  The picture to the left is of Roddie (on the far left with the asterisk above his head) and two other co-workers at the oil derricks.  The picture is courtesy of Vera Buffalo Josey, who was married to Leslie Doyle Josey (now deceased) who was a son of Charles Lafayette Josey, who was one of Roddie's four sons.

In 1993, I had been working on our family histories for over 25 years and had come to a dead-end with Roddie's dad, John Thomas Josey.  I had found John Thomas and Roddie and most of their descendants, but there was a brick wall trying to find John Thomas Josey's ancestors.  I had heard about a Josey reunion in Texas, so I took myself and marched right over there.  Bud Josey had a "conniption fit" when he found out who I was, because he had been at a dead-end from Robert Jossey, in 1565 to John Thomas Josey in 1849, and he was at his brick wall with John Thomas Josey from the other end.  So, we were able to merge his records and mine and have a complete picture. The lineage listed on the Josey Tree page is from the gigantic efforts of Bud and Marion Josey and their many, many years of diligent research on the Josey line, combined with my 25 years of research. 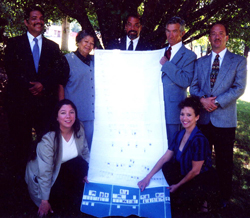 Here is a picture of my brother, James Bradley (Buddy) and Hilda Josey, with their five children holding the Josey ancestor chart that I put together.  Shown from left to right are Jimmy, Hilda, Roy, Buddy, Charlie, Betty and Mary.  What a great family!  I am listing our Josey line from the beginning of Robert Jossey born in England about 1565 and on down to Roddie and then our dad, Roy Lee Josey, born in 1909, a total of 344 years, but counting the living generations of today, this line is traced back 438 years.

Our Josey line is underlined, italicized, and bolded, in order for you to follow Roy and Roddie Josey's line.

2.  James Jossey (Gentleman) - born about 1600, in London County, England, and he came to the colonies sometime after 1635.  According to Bud's notes on James (Gentleman) in the House of Jossey-Josey book "James Jossey, Gent. was the forefather of our Jossey-Josey Family, arriving in Nansemond County, VA in the mid-1600's. He was named Executor in the will of Major General Richard Bennett, the Governor of Virginia, on March 15, 1674. (Seventeenth Century Isle of Wight County, Virginia, by John Boddie, 1938, P 288.) This established him as a citizen of prominence and substance in the County, as well as a later reference to James Jossey, 'Gent' (leman)."  He and wife, Elizabeth Jane Graydon, had a son..........

3.  Charles Lafayette - 10/16/1901 born in LA, married an unknown Josephine McMillian and had a Jr. that the family knew nothing about until after Charles died and the family from his second marriage found a letter that was from the war department stating that his son, Charles Lafayette, Jr.  had in fact been in the paratroopers and killed in WWII in France during the Normandy Invasion.  Charles Sr. married a second time to Arie Zona Kilburn April 22, 1936 and they had two children,  and Charles died 05-01-1964 buried in San Jacinto Memorial Park in Channelview, TX;

12.  Roy Lee Josey - born 03/01/1909 (there is still a question as to where he was born for sure - AR/LA/TX.), but all documentation indicates Nash, TX.  Roy and Cleo Sims Josey were married July 30, 1932, in Caddo Parish, LA and  had either seven or eight children, of which six are still living and all of those children were born in Shreveport, LA.  Roy Lee Josey died October 4, 1954 and is buried in Mt. Gilead Cemetery, Vivian, LA.

Roddie Lee Josey and his first wife, Mattie, divorced in 1916 in Caddo Parish, LA. Bud Josey found that information, but there was no month and no day shown - just "1916."

As to Roddie's life with Mattie, (Granny), what little information we do have is on Granny's page.  We were more fortunate to be able to reach live people from recent years to give us more information on Roddie and Eunice.

4.  Ninnie Lillian - 05-20-1925 in Vivian, Caddo Parish, LA, married to Lloyd Dicus Patrick, and later to James Talent and thirdly, a living husband.  We have tried and tried, all to no avail, to find Ninnie, but we have had no luck; and have no idea if she is alive today or not.

5.  Ruby/Hazel/Louise/Cynthia - Still living, so pertinent facts will not be published here.

So, Roddie Lee Josey had five children with Mattie, his first wife and then five more with his second wife, Eunice Edtis, who had been married twice before she married Roddie Lee.  She married first William Floyd Kitchens and they had two children, Buel (Bud) Odel and Mildred.  Eunice Edtis then married Francis Wright and had Marion Francis Wright.  Eunice Edtis married a fourth time, after Roddie Lee died, to a Louis Wright, and they had a son who is still living also. 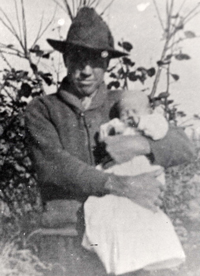 In interviews with Enoch Wright, son of Eunice and her fourth husband, Enoch was kind enough to share additional information on Roddie Lee.  Per Enoch, Roddie Lee was a short man, but everyone said he covered every inch of ground he stood on.  Roddie Lee could swing a nine pound broad axe all day long, and he made the walking beams that they used in the oil fields, for pumping the oil wells.  Enoch said that Roddie Lee was a fine man, very stubborn and determined, with a whole lot of pride.  But, he had absolutely no education whatsoever, per Enoch, and he could not read nor write.  Roddie Lee also made all of the furniture that they had in their home. He had a broken leg and when it healed, he walked with a limp and that leg was shorter than the other. Enoch states that Roddie Lee was a hard worker and he did work in the oil fields, but Eunice came from a farming family in Mississippi and she wanted Roddie Lee to farm in LA, so he quit the oil fields and began farming.  Enoch also said that Eunice gave Roddie Lee's pocket watch to Roddie Alvin, but Enoch does not know what happened to the watch after that unless Delaine gave it to one of their children.

As stated earlier, Roddie Lee had a drinking problem when he was married to 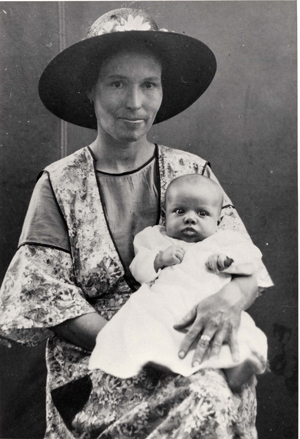 Mattie first, but he finally straightened up, stopped drinking and married Eunice, and there were no further drinking problems, but Eunice and Roddie Lee had some "cussin fights," per Enoch.  We know that Eunice was a spirited pioneer and, apparently, Roddie was also. Just another colorful piece of family history.

The picture on the right is of Eunice.  The handwriting on the back of the original picture states "Me and little Eddie," so we are assuming that is Eunice's handwriting.  Below that is another handwriting "This is Mrs. Josey & Eddie who died at age 8 or 9."  Actually, Eddie Leon Josey died August 07, 1935, so his age at death was 12 years, 4 months, 10 days

Roddie Lee and Eunice lived on the Lizzie Plumb place in a four room house the first few years they were married and then they heard about the government homestead act, and they applied for and got the land about a half mile across the woods of 54 and 40/100 acres in the spring of 1927.  Shortly after that, Roddie found out that he was sick.  Roddie and several others cut down trees and took them to Bill Stewart's Sawmill to have them cut the trees into halves for building the house.  But, before they could actually begin building the house, Roddie Lee died in September 1927, per Enoch, of liver cancer.  Enoch said they pulled three or four gallons of fluid out of his body, so he must have been in pretty bad shape.  He was only 52 when he died.  Then, Eunice and her two sons, Buel and Marion began to build the house.  They built two rooms and then moved in and continued to build onto the house.

I remember, and Enoch does too, we think it was in the 1930's, when Lillian was bitten by a ground rattler snake and Hazel was bitten by a rattle snake pilot.  Eunice took them to the Pentecostal church in Vivian in the south side of the city, and they had a prayer session and they never saw a doctor, yet they survived.  Enoch and I were reminiscing about how Eunice always gave them laxatives for all ailments, just as my mother did, for every ailment that came along.  They never, never saw a doctor. We also remember there being no electricity, just kerosene lanterns.  Also, the milk was kept in fruit jars and a rope was tied around the top of them and they were kept in the nearby stream to keep them cold since there was no electricity, thus no refrigeration.  We remember churning butter there also.  Roddie and Eunice farmed with every kind of crop imaginable, corn, peas, all vegetables, watermelons, hay, etc.  Jack and Coly were the two small black mules that Roddie had to pull his wagon and Jack was the mean mule.  Enoch still has one of the wheels off of that wagon in his back ground in the year 2003.

Roddie Lee got his 12 gauge ivory Johnson shotgun (single barrel) by trading four bushels of sweet potatoes for it.  The gun was made around the turn of the century, making it more than 100 years old.  Enoch said that Roddie Lee killed a hawk with this rifle from 138 yards away, as it was flying.  Everyone said that was impossible, but it happened, Enoch said.  Roddie Alvin inherited the gun and when he was dying, he told his family that he wanted Enoch to get the gun, so Roddie Alvin's family gave the gun to Enoch at Roddie Alvin's graveside services.  Roddie Alvin died of heart problems.

As stated above, with the living descendants today in 2005, we have
16 generations traced back on our Josey side.
Roddie Lee Josey's direct descendants, to date, total 140.

Below is a picture of the home (from two different angles) that Roddie Lee and Eunice started to build, but Roddie died before it could be built, so the rest of his family finished it and lived in it.  Roddie and Eunice are both buried, along with two of their sons, next to this home in the Josey Cemetery.

Roddie Lee died of liver cancer according to Enoch, but I heard from other family members that he had an ulcer the size of a dinner plate, or some kind of growth.  Roddie Lee Josey died September 8, 1927 and is buried in the Josey Family Plot-County Line Road 4566, Bivins,Cass Co.,Texas/LA line.