Chuck's mother's dad's mother (Chuck's great-grandmother)  was
Nancy (Nannie) Gibboney BARNETT
Nannie was born in 1848 (Wythe County) Wytheville, VA
Death date - location - burial statistics - we do not have, so if anyone has that, please share with us

Nannie and Uriah had the following children:

THE FOLLOWING INFORMATION WAS OBTAINED FROM SEVERAL RELATIVES.
WE EXTEND OUR SINCERE THANKS TO THEM:

This info was obtained on this family from Wendy Barnett Burnett and Luella Barnett Turner. 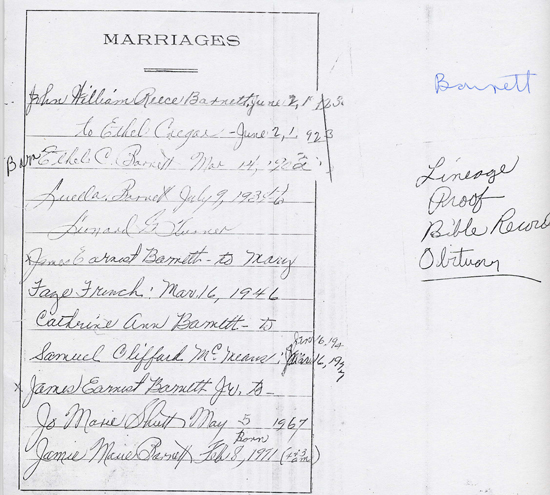 Col James Barnett did not have a son Reason-- His children as per his will
were John, William, Rachael, David, James. Ann and Margaret. His son William
was my gg grandfather. I have no Idea who Reason's father was. The lady that
joined the DAR under Reason used Col JAMES BARNETT as her ancestor and he
was not. Later , as others joined under Reasonn they added some of the
proper children in the children space on their applications.

I contacted the DAR and sent them my research. They have corrected their
records to show the proper children. They show the above children as the
PROPER children of Capt. James Barnett. He was not made Col. until after the
Rev. War.

"William Madison and Col. James Barnett were soldiers in the battle of
Guilford 1n 1781"-THIS IS CORRECT

I WOULD LIKE TO MAKE A CORRECTION TO THIS LINE.

COL JAMES BARNETT , WIFE RACHAEL WAS THE SON OF SGT JAMES BARNETT AND
REBECCA . COL JAMES DID NOT HAVE A SON REIZEN, HIS CHILDREN WERE JOHN,
WILLIAM-MY GG GRANDFATHER, RACHAEL, DAVID JAMES, ANN AND MARGARET. THE WILL
OF COL JAMES WILL WAS PROBATED 7 4 1808. THERE IS NO REIZEN LISTED IN HIS
WILL, LAND RECORD OR IN ANY OTHER RECCORDS IN BOTETOURT, OR MONTGOMERY CO. VA.

JAMES WAS A CAPT IN THE REV WAR AND WAS NOT MADE COL. UNTIL 1782 AND AFTER
THE REV WAR WAS OVER. HE CAN NOT BE LISTED BY THE DAR AS A COL. DURING THE
REV WAR, ONLY A CAPT.

THE DAR HAS CORRECTED THEIR THEIR RECORDS TO REFLECT THE ABOVE INFO. THEY
NOW HAVE A COPY OF THE WILL OF COL. JAMES. AND THE WILL OF SGT JAMES ON FILE
ALONG WITH A LARGE AMOUNT OF OTHER RECORDS.

I HAVE TRIED TO FIND THE PARENTS OF OF REIZEN BARNETT FOR THE DAR WITH NO
LUCK. AS FAR AS I KNOW, THE DAR HAS NOT FOUND A FATHER FOR HIM EITHER. IT IS
POSSIBLE THAT THE FATHER COULD BE ANOTHER JAMES BARNETT AND THAT COL JAMES
OF BOTETOURT. MONTGOMERY CO. VA. WAS USED BECAUSE OF HIS DOCUMENTED
SERVICE. I DO NOT HAVE AN ACTUAL COPY THE MARRIAGE BOND OF REIZEN. ONLY AN
ABSTRACT FROM A BOOK. IF YOU CAN FIND A PLOTO COPY OF THE BOND, MAYBE IT
WILL LIST A FATHER OR BROTHER ETC.

I HAVE SAR CERTIFICATES FOR CAPT JAMES BARNETT, HIS SON PVT. WILLIAM
BARNETT AND A CERTIFICATE FOR THOMAS MILLER THE FATHER OF WILLIAM'S WIFE ANN
MILLER ALL THREE SERVED FROM BOTETOURT CO. VA.

JOHN, WILLIAM AND ANN MOVED ON TO LINCOLN CO. KY. . THE REST STAYED IN
BOTETOURT AND MONTGOMERY CO.

I AM SORRY TO BE THE ONE TO TELL YOU THIS HOWEVER THE DAR HAS A CORRECTION
DEPT. NOW, SO THAT THEY CAN CORRECT SOME OF THE OLD INFORMATION THAT WAS
INCORRECT.