1st (Fagan's-Monroe's) Cavalry Regiment [also called 6th and 1st Arkansas Trans-Mississippi Cavalry], organized by Colonel J. F. Fagan in May, 1861, contained men from Izard and Carroll counties. Attached to General Cabell's Brigade, it participated in the conflicts at Cane Hill*, Prairie Grove, Fayetteville**, and Marks' Mills where 13 were killed and 23 wounded. The regiment later skirmished in Arkansas and disbanded in May, 1865. Its commanders were Colonels James F. Fagan and J.C. Monroe, Lieutenant-Colonel A. V. Reiff, and Majors M. D. Davis and James M. O'Neil. 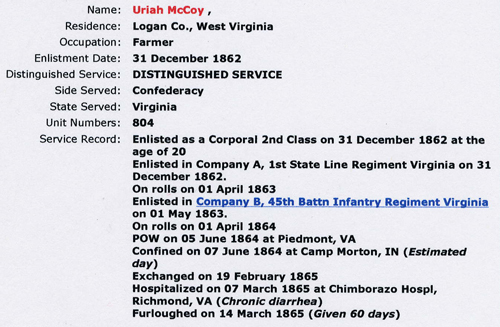 Philip Barnett was born near Lynchburg, VA and his occupation was a saddler and harness maker

I have no idea why he is listed as JAsey.

3rd Regiment, Louisiana Infantry 3rd Infantry Regiment was assembled during the spring of 1861 with men from Iberville, Morehouse, Winn, De Soto, Caddo, and Caldwell parishes. The unit fought at Wilson's Creek and Elkhorn Tavern, then moved to Mississippi where it was active in the conflicts at Iuka and Corinth. Later it was assigned to L. Hebert's Brigade in the Department of Mississippi and East Louisiana and was captured in the fight at Vicksburg. After being exchanged, the regiment served in A. Thomas' Brigade, Trans-Mississippi Department. It contained 271 officers and men in March, 1862, lost forty percent of the 264 at Iuka, and totalled 38 effectives in December, 1863. Early in 1865 the 3rd disbanded. The field officers were Colonels Frank C. Armstrong, Jerome B. Gilmore, Louis Hebert, and Samuel D. Russell; Lieutenant Colonels O.P. Amacker, Samuel M. Hyams, and David Pierson; and Majors John S. Richards and William F. Tunnard.

Detailed Soldier Record
Click on the question marks for help with this form.

Howard Hughes is buried in this same cemetery