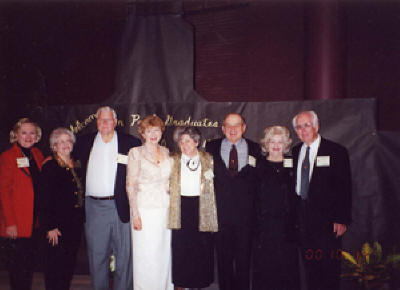 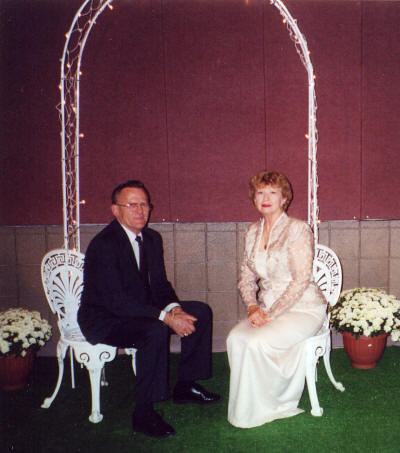 The first day was a small luncheon get-together at a local restaurant. About 10 of us. We laughed so hard, it was a great beginning. That Betty Jane just kept us in stitches. And, I have to say that Gay goes out of her way to treat her guests almost like royalty. It is always a pleasure to stay with her, and we just sit up and yak away half of the night.

Then, that night was the western BBQ.

It was great seeing so many there from our class of 1952, over a hundred. Tickled me pink to see Philip Kircus, because he called me after he received his invitation and said he was so glad we had tracked him down since he had not been to any of the other reunions, he was really looking forward to it. And, he and his wife had a great time. Yep, Philip, even though you told me that I had a bird's nest hairdo in the 50's and still have the same kind of hairdo, and then everyone started calling me Ms. Birdie, it was still great to see you. :>)

Betty Jo, it was especially great to see you too and see you are doing so well. It was great seeing Gay, May, Jane, Betty Jane, Fern, Louise, Dot & Gale, Jimmy, Martha, Glenn, Roy, Sara Jane, G. A., Danny, Clarice, Medy, and many more that I have missed, but just ran out of time to get around to spend time with. Food was great, music super, company fantastic.

Then, Saturday A.M. up with the chickens again and off to the civic center to decorate at 8:00 a.m. There were almost a hundred folks there decorating that huge hall for that evening. A lot of work went into the event. I am here to tell you, that committee worked hard on this event for almost two years. Since this was for all of the classes of 1950-1959 combined, they were expecting about 1,000, so it was quite a big deal. Sam, they may not have had the Broadway production that you guys always put on at Chuck's reunions in Pittsburgh, but they did themselves proud with all that they did, believe me. They deserve all the praise they can get. That was no small feat that they pulled off for that many people.

Each class did up their own decorations for their tables. They had a designated spot to hang the banner for their class year. One class put up an Indian tee pee (we were the Fair Park High School Indians), so that was really neat. Louise and others worked on the huge silhouette of the school in black and gold lettering F.P.H.S.1950-59 and they had a spotlight shining on it. Black & gold balloons everywhere. Two incredible bands, juke boxes from the 1950s, they even brought in a motorcycle from the 50's and two cars from the 50's. They were gorgeous, & really brought back the memories. Mums & plants everywhere. Huge array of door prizes on display.

One of our classmates, Bill Plumb, had the monumental task of dealing with each class trying to line them up on the risers to take each year's class picture. I have a feeling they are going to be great pictures. He really seemed to be very particular how each person was placed, turned, looking, etc.

Then, when they called out on the P.A. system for the West End Gang to come out to have their pictures taken, all heck broke out. You never saw so many trying to line up for a picture in your life. We had no idea there had been that many from the West End of town, where I came from. In our class, at our reunions, we had always gotten together for our West End picture, and there were always only about 10 of us. But, since this was a 10 year collection, the group size was staggering. Billy was ready to bop us on the head with a bat, I bet, especially after he had coordinated putting together 10 large classes of classmates for their pictures, and then to see this herd coming in that was so large, just when Billy probably thought he was about finished for the evening. He needs a lot of praise for his hard work too. After I looked at the picture, it was not really that many in the picture, but at the time, it seemed as if it had been.

But, above all, in addition to the music, food, visiting, etc., one thing brought it all home to me. Out in the lobby, they had an archway leading to a Garden of Memories. Each class had done up a board or a plaque in memory of our deceased classmates for the ten years and put them up on tripods or tables. One class had gone out and gotten a huge tree branch and sprayed it with gold paint and put the pictures of the classmates on black backgrounds with a gold border on them, if my memory serves me correctly, and they were hanging from the branches. Just such an ingenious idea. But, what struck us was that we had lost so many folks. It really brings home that we should live every day to it's fullest. Betty Jane did such a great job on our classmates' board, enlarging their pictures and putting the dates that we lost them under their names. She did it up on a tri-fold poster board and left blanks at the bottom so we can add to it when necessary and we can take it to the next reunion, our 50th in another year and a half.

And, speaking of Betty Jane, she is one of the most exceptional people I have ever met. What a joy it was to spend time just sitting there listening to her. She is a retired school teacher, and while I am sure she was an outstanding teacher, I definitely feel she missed her calling, that of a comedienne. She is Erma Bombeck, reincarnated, trust me. Keep your eyes open for the book that she is writing, it will have to be a best seller!

Saturday, we had decorated from 8:00 a.m. until about 1:30 p.m. and went back to the dinner and dance at 5:00 p. m, & got home at almost 2:00 a.m. Got up Sunday at 7:00 a.m.& we all went over to the Isle of Capri for the farewell breakfast. We always enjoy that so much. All in all, I just don’t think the committee can be thanked enough for all of the hard work that they put into this event, so our sincere thanks go out to each and every one of you. Thank you all so much!