You were our sixth grandchild and we were just as excited and thrilled as we were with the other five who had already appeared on the scene.  You were such a handsome dude when you were born and we knew that you were going to become even more handsome, if that could be possible.

The very first memory of you that comes to mind is the night I baby sat with you so your mom and dad could go out to dinner.  You were only a few days old and I was very confident that you were going to be a piece of cake to take care of.  Your mom and dad said you were such a good baby, so how could there be any problems?  Wellllll, let Grammy tell you, it was not a piece of cake evening.  You got hungry within minutes of my arrival and I went to get your bottle.  When I began to feed you, the milk dripped out all around the nipple, and was all over you.  I tightened the cap and it still dribbled and then it began to come out more than a dribble, until it was empty and more of the formula was on your shirt than in your tummy.  You were screaming for more and I ran to get more.

Well, more was not to be found anywhere.  I looked high and low in that kitchen and could not find more formula for you.  Your mom and dad did not have a cell phone at that time, so I could not call them.  I called your aunt Elise to get your aunt Cathy's phone number, hoping she would know where the formula was.  Aunt Cathy was not home, so I had to call Pa Chuck to have him get the telephone number for "Ba-Ha" and "Bow-Wow", your other grandparents.  Pa Chuck did not even know how to turn on my computer at that time to find the address book with all of my telephone numbers.  So, I had to talk him through turning it on and then finding the address book and scrolling down to find your Ba-Ha and Bow Wow.  And, all of this time, you were screaming to the top of your lungs in the background.  I was a nervous wreck.  Now, we all know Ba-Ha and Bow-Wow live some 70 miles away in Sarasota.  They were home, but had no idea where the formula might be.

At this point, I began having a  tachycardia attack, my heart was racing out of my chest, and I truly thought I was going to have to call "911" for the first time in my life.  As I got dizzier and dizzier, you managed to scream louder and louder, if that could be possible.  I made myself calm down and went back to the cupboard and found your formula behind something else.  I prepared it, fed you and you were finally a happy camper.  I took you into your bedroom and began to clean you up and change your clothes.  I desperately needed a change of clothes myself at that point, with a lot of that formula spilled all over my blouse.  While I was cleaning you up and talking with you, you were just cooing and so happy.

And, then I looked up and your dad was standing in the doorway smiling while watching the interaction between Grammy Jaws and this sweet grandchild, Daniel.  Until Grammy turned around and your Dad broke out laughing because I was so covered with your formula.  Your dad said I looked as if I had been in a combat zone, I was such a mess.  I told him that he should see my heart and stomach, because they were in worse shape than the outside of me.  And, you were lying there kicking, laughing, happy, gooing, and making it very difficult for Grammy to ever get the point across about what had actually transpired.  And, that is my most memorable moment with you, young man.

We have been to many of your plays at school, almost all of your birthday parties, your ball games, and just enjoyed watching you grow up.  We enjoyed the couple of times you came over and spent the night with us.  One of the funniest memories I have of you is when you were in the store one day, you told your mom not to use money because it was dirty, and she should use her credit card, because it was cleaner.  You are a mighty thrifty young man.  You put all of the money that people give you into your bank.  You love counting it.  One time, you wanted something in the store and your dad told you that he could not get it at that time, and you said that you had money at home and you would pay him back when you got home.  You got home and your dad told you that a promise was a promise, so you went into your bedroom to get the money to pay him back.  Then, you asked your dad for your thirteen cents change from your $20 that you had given your dad.  Another time, the same thing happened at the store and it was only a $2 item, and when you got home, you went in and got two dollars worth of pennies to pay back your dad.

And, what an honor it must have been for you to be elected mayor of your class for a huge project at the mall.  Remember how you had to go to each of the businesses that your classmates had set up at the mall, and do everything that a real mayor does in a city?  They even had a desk for you with a checkbook in your name, and you had business cards on the desk.  That was a neat thing to have as a memory in your life.

Another time that endeared you to my heart was in 2003, you and your family took Bow-Wow and me to Disneyworld.  We were standing at one of the rides and one of us would have to stay behind with Julia because she was not big enough to go on the ride.  I said I would stay and your dad said that I should go with you guys since he had been on the ride once before and I had not.  I insisted that I would stay with Julia.  Daniel, you walked around behind everyone, came over to me,  and took me by the hand and said "come on, Grammy, you are going to ride with me."  You just took charge and made the decision for all of us.  I really thought that was so sweet.

You have always been in the accelerated classes in school.  You have been very studious all of your life.  You are a very serious young man, and I often wonder what you will become when you are grown.  It will be interesting, but I am sure it will be something special.  You make us very proud to have a grandson like you.  And, we know you are too young to appreciate it now, but the girls all swoon over you at school.  You don't like to be teased about it, but your teacher says that the girls have always wanted to sit next to you in the cafeteria, and try to be around you as much as possible.  Can't blame them because you are good looking.  Who knows, perhaps you will grow up to be a big time movie star, huh?

Another memory that I think you and Julia will always hold onto is the fun you had when Grammy picked you up in the car to go to dinner, and you two would sit in the back seat.  You would ask Grammy to turn on the "On-Star" button so you could get directions to the nearest restaurant, or if you knew which one you wanted to go to, you would tell them you wanted directions to Cracker Barrel or Steak and Shake (or as Julia said - "Shake and Bake".)  Remember how the lady from On Star always told you that she hoped you enjoyed your dinner when you got there?  But, then Grammy had to go get a new car and it did not have On-Star in it.  But, you can hold on tightly to those memories from the 2001 Buick that Grammy took you out in.

December 2004, what a nice surprise, Daniel.  You brought a beautiful wrapped gift out to me on the patio on Christmas evening and you said "Grammy, I bought you a Christmas present" and you handed it to me. I thank you and asked you to have a seat by me and I would open it.  You then informed me so proudly that you got it for a 70% discount.  As I said, you will be a millionaire by the time you are 40, if not sooner.  We look forward to many more special events with you, Daniel.
Love you lots, Dude -  Grammy Jaws and Pa Chuck - April 20, 2004 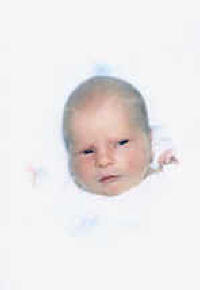 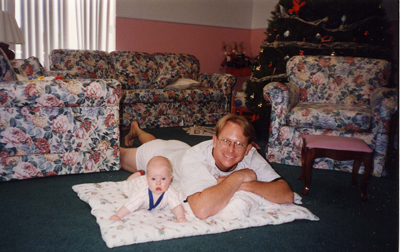